Time to say goodbye – how to have a good funeral

“I became a funeral director to be able to empower people to create funerals that are meaningful, reflect the person who has died and are helpful for their friends and family.

As a doctor, I saw the value in people taking as much control as possible by giving them the information and time they need, to make the decisions that are right for them.  Being vulnerable, ill or bereaved doesn’t mean you can’t work out what might help you and it seemed to me that the same applies when planning a funeral. 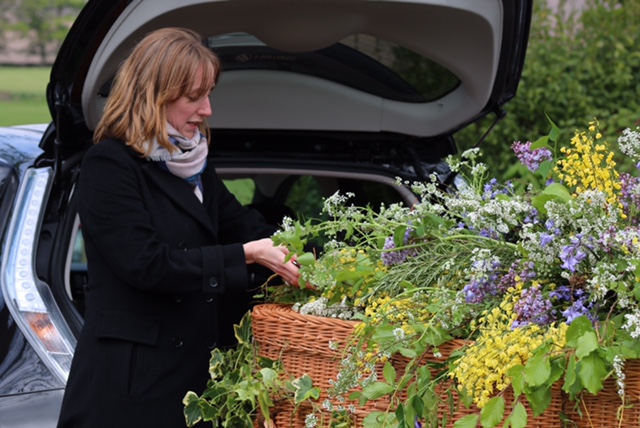 As a society, we are often reluctant to talk about death, dying and funerals and as a result people know little of the choices available to them.  Furthermore, the industry increasingly talks about “traditional” or “alternative”, which is not very enlightening when most people just want to plan a funeral that reflects the person who has died.

Dying Matters is a national coalition which tried to encourage people to talk more openly about death, dying and bereavement.  Having been a coalition member for many years, I was delighted to join the well-established Leeds Dying Matters Partnership and have subsequently established a Wharfedale Dying Matters group.  Partners work together to host various events during Dying Matters week in May and aim to get people more active in end-of-life planning.

Sadly, many people have shared with me that they previously felt that a funeral is simply something that they must “get through”.  A funeral can be much more than that and the opportunity to engage in creating a beautiful and unique event can support more positive outcomes for people months and years down the line.

Many funeral directors focus almost exclusively on the funeral service itself but arranging a funeral is a time when people can create beautiful things together.  For example, by choosing or arranging flowers, picking photographs for a display, writing notes or drawing pictures to put in the coffin or spending time decorating the coffin itself.  From the feedback we receive, these times remind people that there is hope during an otherwise challenging time.

A more open, flexible approach also means that children can be involved and their first experience of death and bereavement can be honest and support the natural resilience inherent in us all.

So, we have established a service that is open, flexible and empowers people to be involved in choosing what is right for them.  We don’t talk about the “right way”, don’t have standardised packages, make no assumptions and don’t patronise people by thinking they can’t make decisions.

Having always believed in the concept of “informed consent”, I also believe that this should still apply once someone has died.  We speak gently but openly to people about how they would like us to care for the person who has died and don’t routinely perform any invasive procedures.  Although this can be a difficult thing to talk about, people consistently tell me they appreciate being given the information to be able to make these decisions themselves.

People increasingly want to make some funeral arrangements while they are alive and well and most people are familiar with the idea of buying a funeral plan, where you can pay for your funeral in advance.  Plans give protection from any future price rises and reduce the financial and emotional pressure on those arranging the funeral.  There are several different funeral plans available and we have chosen then plan provider which we feel is the most client-centred.

There are also individuals who want to ensure that their funeral is as they want it to be and who want to write down their personal wishes.  These wishes might be very brief, or more elaborate but any clarity is helpful and reassuring for those planning the funeral.  It is hard to make the right choices without understanding exactly what is available so we also support people to decide their funeral wishes, without any obligation to then use our services

Luckily, from the positive feedback we are receiving, our approach is genuinely helping people and increasingly families are approaching us from further afield because they see the value in what we are offering.  We also recently received a glowing validation from the Good Funeral Guide and became their only recommended funeral director in the local area.

It is a huge privilege to be able to support people, at what is often a difficult time, and help to set the tone for a more positive grief process over the longer-term. I feel very fortunate to do the job that I now do.”